Almost two years ago, I posted a blog (here) complaining that Carleton University repeatedly and knowingly breaches confidentiality of its students by and through its final exam signing sheets. Students at regularly scheduled final exams are required to write their name, signature, and last four digits of their Carleton identification number on this signing sheet. See the latest version of the signing sheet, below. The problem is that the 30th student gets to see the names of the prior 29 students who signed the sheet, even though the previous 29 students did not give their voluntary consent to have their identities disclosed to their peers. Students seem to be coerced into disclosing their own identities to other students in the class. Divulging identities of students seems to constitute a prima facie FIPPA violation (Freedom of Information and Privacy Protection Act). While I am not a lawyer, section 42 of that law seems to preclude use of Carleton’s final exam signing sheet with more than one name on it. Curiously, Carleton has a final exam signing sheet for use by just a single student, a form that is seemingly only used by the McIntyre Exam Centre.

In my decade at Carleton, there have only been two very minor improvements to this personal privacy travesty. First, the final exam signing sheet now only requires the last four digits of the Carleton identification number, not the remaining digits. Second, instructors can opt out of use of this thirty-signature form. Unfortunately and perversely, students cannot opt out of signing this form. While Carleton University has been well aware of this breach of privacy of virtually all of its roughly 25,000 undergraduate students, Carleton has effectively done nothing to remedy the problem, even though a fix would be easy, such as purchasing optical scanners to read student identification cards. Scanning student identification cards may also be possible via an inexpensive cellphone app (maybe this app, but I have no expertise in such matters). Given the huge sums of money that the university expends on self-promotion (e.g. printing multiple twenty-foot tall portraits of almost famous people associated with the university), I hope Carleton could throw a few dollars at this genuine privacy problem. And I really hope that Carleton is proactive about this remedy and – god forbid – not simply wait to react to a possible class action lawsuit. 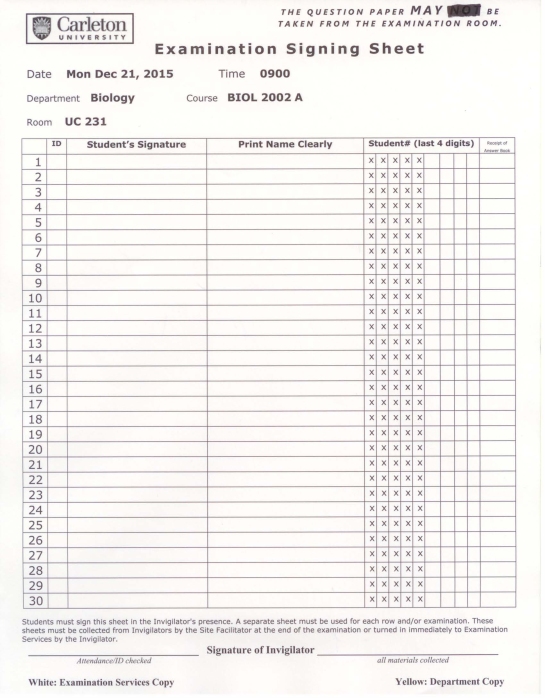 The open session of Senate was dominated by two topics, Global Academy and Culture Works, neither of which are parts of the core of the university. Neither venture seems to give back, other than possibly financially, to the community that founded Carleton.

The presentation on Global Academy was painfully long. It should have taken 20-seconds to tell Senate that Global Academy was a not-for-credit money-making arm of the university that will run professional development and continuing education programs on contracts. However, this explanation dragged on for an interminable 20-minutes. Many members of Senate fell asleep, including the chair of the meeting, before the director of Global Academy finally was given a chance to speak for a few minutes. There were however a few interesting tidbits. First, the director of Global Academy was chosen by fiat of the provost. There was no search committee. Second, the only contract that Global Academy currently has is with the Chinese government. Global Academy will be running summer institutes in 2016 for thirty to forty Chinese administrators, possibly including ESL (English as a second language) training. There will also be a cultural course, something supposedly akin to a “Canada 101” course that will be a blended course, online plus two-weeks at Carleton in August 2016. This is very reminiscent of Carleton’s Confucius Institute. Collectively all the Confucius Institutes have been denounced by the Canadian Association of University Teachers (CAUT). Could Global Academy simply be a way for Carleton to sidestep the CAUT denouncement? Third, Global Academy is a two-year pilot program. However, the administration would not answer how they plan on evaluating the program at the end of the two-years. Will Global Academy be placed in Carleton’s ancillary budget, much as the gym, bookstore, graphics, etc., where future of the operation is entirely dependent on profit? Fourth, Carleton administration made a conscious decision to brand Global Academy as separate from the rest of the university. They are the first unit at Carleton authorized to use their own logo, which is noteworthy given tight control over branding, such as all other units needing to use the same webpage formats and business card designs. Furthermore, the business card for this new venture has ‘Global Academy’ in large print above and ‘Carleton University’ in small print below. This reminds me of two old adages: “The tail wagging the dog” and “The large print giveth and the small print taketh away”. I certain hope only the latter quote from Tom Waits is true and that Carleton University does not just become an imprimatur for the Chinese government.

The relatively good news at the Senate meeting was the enrollment numbers for 1 November 2015, which is the provincial cutoff date for calculating funding. Science, Engineering, and Business continue to grow enrolments at higher than expected rates. Our arts programs are doing better than last year, but on the shoulders of Public Affairs, whose enrolments are back up to expected levels. I am sorry to report that Arts and Social Science enrolments are still suffering, although hear that this is the case across the country.

While highly unusual, there was no call from the chair of Senate for a report on the Board of Governors meeting that occurred three days before and no corresponding item on the agenda. I am not sure whether this omission was intentional, but it was conspicuous and ironic given all the subsequent press coverage of Carleton’s Board of Governors supposedly silencing academic freedom and free speech (see here).

As always, this blog posting reflects my opinions and reporting of events at the open session of Senate. This posting is not meant as a proxy for the official minutes of the meeting. I welcome your feedback.